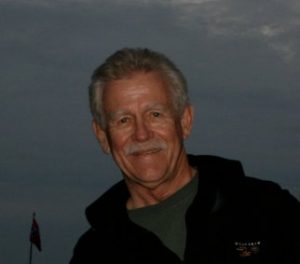 Where are you from originally? I grew up in New Albany, MS, a small town of about 5000 people about 80 miles south of Memphis. As an adult, my wife and I have lived in Jackson, MS; Occidental, CA; Memphis, TN; and currently, on Lookout Mountain, TN.

Tell us about your childhood. My childhood was pretty typical for a kid growing up in the South in the 50’s and 60’s. My dad was an engineer with US Department of Agriculture and my mom was a school teacher. I played sports, hunted and fished, collected Indian artifacts, was an indifferent student, who did an inordinate amount of day-dreaming, but was a voracious reader. I graduated from high school in 1961 and went on to secure my undergraduate and law degrees from the University of Mississippi in 1965 and 1968, respectively.

Do you have a nickname? No. 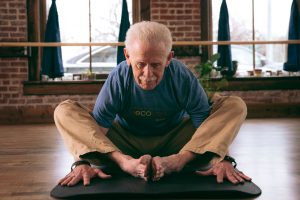 When were you introduced to yoga? For years I was obsessed with running, putting in untold training miles every week and participating in numerous races, including some 13 marathons. However, in 2002, I had to cut back drastically on my running due to knee problems. My wife and I were out walking one day in Memphis and came across Midtown Yoga Studio. Neither of knew much of anything about yoga, but decided it might be interesting. Long story short, I began taking classes, became totally hooked, enrolled in a teacher training program being offered at Midtown Yoga, by OM Yoga out of Manhattan, and was certified as a yoga instructor in 2003. I began teaching shortly thereafter and have been at it ever since, having taught at Midtown Yoga and Breathe Yoga in Memphis and ClearSpring Yoga and the Downtown YMCA after moving to Chattanooga in 2009. I find that yoga is an important component in my current athletic activities, which consist in biking and swimming.

How do yoga and the community play a role in your life? As a teacher, there’s no better feeling than to finish a class knowing that the people you’ve just put through the paces will walk out the studio door feeling so much better than when they walked in. That knowledge is payment in and of itself for my time spent in the studio. Additionally, I donate whatever I make teaching yoga to the Elephant Sanctuary in Hohenwald, TN.

What pose to you love the most and why? I can’t say I favor any one pose over another. My practice is generally what I call slow-flow, that is, a series of poses, one feeding into the next for just under an hour. My emphasis is primarily on stretching and the release of tight muscles and connective tissue leading to a totally relaxed and peaceful shavasana.

What is your favorite quote? “The way is not in the sky, the way is in the heart. All things arise and pass away, but the awakened awake forever.” From The Dhammapada, Sayings of the Buddha.

Howard is an author of poetry and gets published regularly. Check out his amazing work here: http://tuckmagazine.com/2019/04/01/poetry-2053/