Where are you from originally? I’m originally from central Pennsylvania. A cozy little town south of the state capital.
How long have you lived in Chattanooga? I first visited Chattanooga in April of 2015. Our little family decided we wanted to move here and grow some roots, so we bought our first house and settled in that July!
Tell us about your childhood: I had a good childhood! My sister is 7 years younger than I am, so I grew up mostly with a hoard of cousins 🙂 We were pretty wild and not always nice to each other, but it was great to develop those relationships at a young age that have lasted into adulthood, even though we’re spread out. My mom is an academic and my dad is a pretty esoteric guy, so I was always encouraged to explore ideas, think for myself and read all kinds of philosophical and theological books starting at a very young age.
Do you have a nick name?  My family has a nickname for me, but it’s a secret 😉 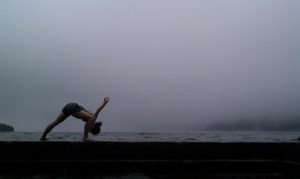 When were you introduced to Yoga? I was introduced to yoga in 2008 when I studied abroad in Quito, Ecuador. I was a religious studies major and got the opportunity to study Buddhism and yoga with a Buddhist monk at the university I attended that Fall. He was a rigorous hatha yoga practitioner, so my first introduction to yoga was very intense and focused on asanas as a means of building toward increased capacity for meditation.
How do yoga and the community play a role in your life? Yoga has been a significant part of my life since I began practicing in 2008. First as a means of centering and building strength (I had some low back issues in college). When I came back to the US, I was introduced to Holy Yoga and began to incorporate yoga as a spiritual discipline. It is now deeply intertwined with my meditation and prayer life. I also enjoy the physical aspect of yoga in it’s capacity to balance and challenge me. Yoga has brought me greater awareness in many aspects of my daily life, and I’m so excited to be part of the PSY community and to build relationships here in Chattanooga!
What pose do you love the most and why? I don’t know if I can pick a favorite pose! They each offer so much and for different times of day and seasons of life. I really like camel pose for a deep back bend. It always feels good to hang out in downward facing dog or reclined bound angle, too!

What is your favorite quote? I saw this quote on a greeting card (which I bought) and come back to it as a kind of mantra of living, especially when I’m feeling stuck or overwhelmed…”Find life experiences and swallow them whole. Travel. Meet many people. Go down some dead ends and explore dark alleys. Try everything. Exhaust yourself in the glorious pursuit of life.” – Lawrence K. Fish